The TEN-T Corridor Orient/East-Mediterranean (OEM) Hamburg-Athens is of utmost importance for the cohesion of Europe. With a length of more than 2,000 km, it connects strong economic areas of the western EU member states with prosperous capital regions of the South-Eastern EU member states. The International Working Group (IAK) "Spatial and Transport Development along European Corridors", which was active from 2015 to 2018 under the leadership of Prof. Dr. Bernd Scholl (ETH Zurich), focused its discussion on the challenges for spatial development associated with this corridor. 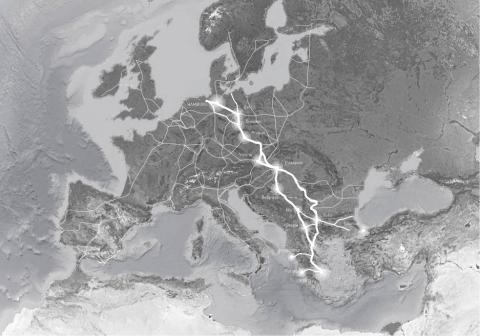 An important goal of EU transport policy is to strengthen freight transport by rail. This is accompanied by major challenges in the easternmost European economic corridor. The transdisciplinary expert panel has developed policy-relevant statements for the future development of this area. The working group found the empirical basis in projects on site, especially in the participating Balkan countries. There, the planning systems and cultures often differ considerably from each other. They were at the core of the discussions on the future of hot spots of transport and settlement development. The cross-border cooperation of the participating EU member states turned out to be an essential success criterion for a functioning corridor.

With the TEN-T OEM corridor coordinators Mathieu Grosch and Patrick Vankerckhoven, the working group discussed the results of its work in June 2018 at the office of the Saxon state government in Brussels. Key suggestions for European policy were published in an ARL position paper in early 2019. The position paper summarises the key findings from four years of intensive work and formulates strategic advice for future political action. In addition, as a central result, the IAK published its comprehensive findings in 2019 in the research report "Spatial and Transport Infrastructure Development in Europe: Example of the Orient/East-Med Corridor".

These publications demonstrate the urgency of coordinated action by the relevant decision-making bodies in Eastern Europe and the EU. At the OEM Corridor Conference "Connecting Spaces of European Importance" in January 2020 at the Vienna University of Technology, the discussion was continued with a large group of experts. Key findings from both publications and the continuation of the discussion, e.g. on governance strategies for the Saxony-Czech Republic border region, were incorporated into the INTERREG project "Capitalisation of TEN-T corridors for regional development and logistics" (led by Dr. Scharmann, Saxony State Ministry for Regional Development, Dresden). As a cooperation partner, the ARL is interested in further developing cross-border cooperation in the OEM Corridor, especially with regard to the central European economic nodes in the Czech Republic, Hungary, Austria and Serbia, with all partners.

In view of strong geopolitical interests in this corridor, which are strongly influenced by China's engagement and the New Silk Road, a coordinated and cooperative development of transnational economic corridors seems to become a central concern. More engagement in the easternmost development corridor, which promotes stable economic relations and stable political systems, will translate into pro-European decision-making structures on the ground.