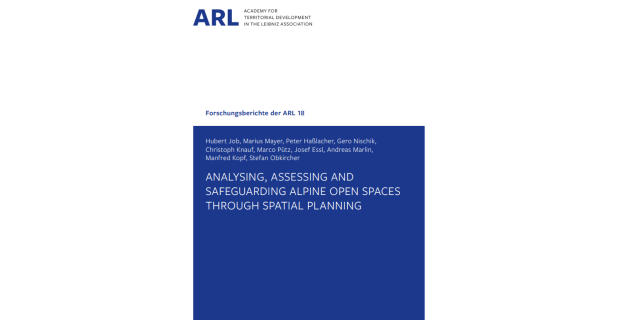 Alpine open spaces are becoming noticeably scarcer. In the Alps, this applies to the inherently limited area of permanent settlement, which in the case of Tyrol covers only 11.8%.

The population is growing in many of the valleys and with it the infrastructure it requires.

However, the open spaces at higher altitudes are also being successively fragmented and equipped with infrastructure (e.g. cable cars, hydroelectric plants) or subjected to increasingly intensive use (e.g. with electric mountain bikes).

The preservation of open spaces in the Alps began in Bavaria as early as 1972 with the implementation of the Alpine Plan, which established spatial planning objectives. The Alpine Plan divided Bavaria’s Alpine region into three zones of varying traffic intensity, a true legislative innovation. Zone C was intended for nature conservation, which was still in its infancy at that time, and also aimed to reduce natural Alpine hazards.

Primarily, however, this planning initiative was related to the role of the landscape as a setting for recreation in open spaces, i.e. leisure and tourism activities in natural surroundings.

Today, there are similar, more or less successful initiatives in all of the German-speaking Alpine states and Switzerland. This publication aims to analyse, compare and describe these initiatives and to critically assess how they are formulated, how they work, and how they are implemented by planners. As the preservation of open spaces is a transnational issue, especially in the Alps, which are intersected by many political borders, we also address the framework provisions of the internationally binding Alpine Convention of 1991 and examine the new EU initiative EUSALP and its potential impact.

The focus here, however, is on bringing together approaches for preserving open space for people (local inhabitants and their traditional economic activities, but also visitors) and their natural heritage.

We present and critically evaluate present-day spatial planning practices related to Alpine open spaces in the German-speaking Alpine region and in Switzerland, and discuss future options for harmonising approaches across borders.